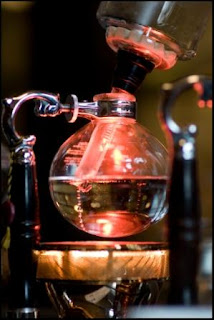 Portland was a perfect venue for the 25th Annual Conference and Exhibition of the Specialty Coffee Association of America. Perhaps, more than anywhere else in America, third wave coffee bars have stormed into existence. Third Wave Coffee Bars are notable by how they look and what they do. They are a direct facsimile of current fashion of SCAA Championships. It’s as if the participants are trying to reproduce in the real world the artificial world that exists during these championships. As a result, these new bars imitate one another in the type of equipment used and more importantly, what and how coffee is offered to customers.

Now, I have been a big fan of the Barista Guild and their efforts to raise the perception of Baristas as a viable professional skill. This is long overdue and has helped our industry staunch the move to automated equipment and look-alike chain operators. But what I have noticed is a disturbing trend in these coffee bars that has more to do with being a part of a club rather than actually serving truly good coffee. These bars can be identified often by what they don't have: they don't have skim milk, or soy; they don't do flavors or 16 oz to go cups. And as far as I could tell, most don't have much in the way of customers, either. What they do have is seasonal single origin espressos from a number of the latest names in roasters, they have pour-over bars featuring Chemex's with metal filters, Hario V60 cones, or Siphon brewers; and they have an educated superiority that leave you degraded, dismissed, and otherwise not a member of the club.

I really would like to admire these coffee bars for their commitment to a vision, a vision predicated on coffee quality. But the concept of quality now seems to be more a sense of style rather than a discerning sense of taste. Coffees, and Roasters for that matter, are chosen based on their merits of who's hot right now. Brewing techniques are chosen in a similar fashion, pour over bars provide more theater and the illusion of choice. Never mind that the metal filter is an inappropriate application for the Chemex brewer and one has to adjust their brewing style to compensate resulting in an over-extracted brew. At least the coffee siphon provides excellent cup quality but it is a ten minute exercise and costs, in some cases, $9.00.

I had debated whether to do a post about pour-over bars before going to Portland and decided to focus my attention on the pour-over experience. We had abandoned pour-over many years ago but I wondered if there had been significant improvements that warranted another look. What I found, aside from the one aforementioned coffee siphon episode, was brewed coffee that almost always was near undrinkable. The problem lies in the substitution of the metal cone for the Chemex or the use of the Hario v60 cones. In either case the issue centers on dwell time of the brew. Great coffee is a function of dwell time and brew rate.  Both the metal filter and the V60 cone allow the water to pass too quickly through the coffee grounds requiring the barista to slow the rate of pour in the center of the grounds. Never do all the grounds dwell in a solution, rather, the water passes through the middle over extracting the same grounds. It is a similar phenomena as cheap electric coffee brewers with inadequate heaters that heat a little water and send it through, heat a little water and send it through, and so on.

The secret behind the Chemex isn't the carafe so much as the interaction of the carafe and the paper filter that allows the user to fill the funnel with hot water and have a full dwelling of water and coffee with the filter and grind dictating the rate of flow for the brew. The Hario V60 also has too large of an exit hole and the striated fins on the inside of the funnel allow water to channel through the filter requiring the user to adopt a similar pour technique as the metal filtered Chemex. Combine this slow pour with the fact that water temperature stability is thrown out the window. One operator was using the Marco Uberboiler for hot water, a precise controlled water boiler that can deliver accurate temperature, set at 210 degrees to allow for the rapid cooling while pouring. Most places make no effort at all water temperature stability.

This was one of the major reasons we abandoned pour-over years ago. But what really made us abandon it were the incredible improvements in programmable commercial brewers. If pour-over produced better results than what we could get out of our Fetco Extractor then I would be on board, but the fact is it isn't remotely close to the same quality and moreover, I can make better coffee in my home using a paper filter Chemex or Aeropress without the condescending attitude as an added bonus.

At first I mistook the Third Wave Movement with its penchant for trade roasts and manual brewing techniques as a response to the like of Starbucks and the wannabe chains. Now I understand that it is an attempt to recreate the experience of the Barista Championships that take place at various convention centers around the world. A fabricated event designed to impress judges and their peers, that manufactures in-the-know celebrities of coffee culture. Customers were never the consideration.

I was asked the other day whether I thought Third Wave Coffee Bars are here to stay. If this is what this movement continues to serve, they won't be around for very long.
Posted by Mark Overly

interesting take on the current up spring of hip shops and roasters. this style is ever so typical of business: 'ooooh, that's the coolest new thing, we can make lots of money!'. on the other hand, there are some shops that know how to do what you say cannot be done. as far as your opinion about the V60, if you cannot get a quality cup, with a consistent extraction and tds, you need to learn more about brewing and probably get a refractometer so you can match your palate to actual readable/trackable points. I don't know what roast levels you're using but I have rarely ever seen an over extracted brew from a V60. rather it is highly underextracted with the spent grounds all down the funnel walls instead of flat or slightly convex which indicates a good level of extraction. since working in a coffee shop in '92 I have had maybe 4 acceptable cups of coffee from a commercial brewer. that is not to say that, programmed and utilized correctly, commercial brewers cannot make a good cup of coffee. they are more forgiving than a single serve manual brew but coffee shops still can't get good coffee out of them. furthermore, you say the large hole and fins of the V60 make channeling a large issue. if anything, those two would add to underextraction as water escapes too quickly, not overextraction. the grounds don't sit at the bottom until the end of the brewing cycle, the filter is slightly larger than the Dripper so it fills around the fins and keeps water from channeling down the sides and if you balance the grind with stirring the brew you keep any coffee from settling at the bottom and overextracting.
I have been using the V60 for two years solid and get a better cup with that than from any other brewing method I have ever had from anyone, anywhere, ever. I assure you I could make you a cup with the V60 that would be easily better than you could EVER get out of your Fetco. It is your methodology that is keeping you from getting great coffee from the V60, not the V60. the same goes for the metal Kone filter.
the biggest problem with coffee shops is that few have anyone (owner, operator or employee) that truly know the science of brewing, let alone actually calculate what extraction/tds they are trying to achieve AND what extraction/tds they actually achieve.
sincerely,
Dan Kennedy
SCAA Certified Brewing Technician

Hi Dan, thanks for reading and commenting. The coffee would have been under-extracted had the operators poured more aggressively. There was no stirring of grounds since there was never enough water in the filter to stir, they were pouring the water through the grounds, slowing the rate of pour to achieve the time target. While I did not purposely identify the shops in this piece, we visited over 20. Some were roasters, others were independents (the best came from an independent). I went through my gold cup training during its inauguration about a decade or so ago. I think it would be untoward of me to bring my tds kit and refractometer when visiting shops that are not my clients.
We considered obtaining both the metal cone and V60 but abandoned the idea based on these experiences. But for fairness sake I will endeavor to bring both into the lab.

I would love to see more of your opinions on the other kinds of technological fads Third Wavers utilize.

It is difficult to argue against expanding a base of products for sale to the public, provided the public is getting what the public consumes most often. For instance, so what if a bad shop ruins a pour-over, or promotes a lengthy viewing of a siphon filter, provided they satisfy enough customers with other products? I'm not sure if "specialty coffee shops" like Blue Bottle are alienating their customers because of their Japanese-style brewing. Of course, other factors might promote Blue Bottle as a solid contender in the Third Waver camp, but my interest in your ideas on these kinds of marketing tensions remains.

Well, Josh, I'm all for technological innovation if it results in a better tasting coffee. Ian Bernstein, in his book "Coffee Floats, Tea Sinks" asserts that it was just this innovation that drove coffee quality. What I object to is adopting methodologies that are more about theater than providing a superior product.

Love this article. I have a "Third Wave Shop", except I do everything as a grab and go. Maybe thats my Sbux experience. But it works.

I read your blog it's was wonderful. I appreciate your article keep it up...thanks

Hi Mark, I would like to make my first approach by thanking you for producing such a rich and meaningful coffee discussion. I won't want to establish me as a coffee addict except a coffer lover since my Speciality coffee made my day. Anyway, the reason of abandoning pour-over is very rational and thoughtful. And about coffee bars, I think there are some places where some coffee bars are truly super committed to their motto or vision. But as the same time I also would like to stress much one thing that is quality. May be style nowadays has been able to dram much attention but in the long run, quality sings the triumphant song. Again my warm thanks to you for gifting us such a coffee loving analysis and of course for sharing.